"Denny has been active through all the changes in the modern Cleveland music scene. His website, starting with his first band The Lost Souls, and especially his pages at MP3. His pages are a wonderful look at the changes as seen through the sounds of his music. Really a must-visit experience." Gajoob, Aug 2000

"Dennis is a talented musician and excellent composer."

"I really like 'Hold on Baby', 'Boy Can I Dance Good', 'You Cut Me Into Ribbons' and others." Guy Giguere, CKIA and CKRL (Radio Stations in Charlesbourg, Quebec)

"I came very close to blowing up my diminutive stereo with this tape- 'In With the Out Takes'. Not that it's loud and obnoxiuos, but because it's got everything from the folkiest of ballads to the 50's rock'n'roll shakers. The occasional ragtime piano made the whole thing reminiscent of a merged Woodstock and Cookstown steam engine." Ear Meat (Trent University - Peterborough, Ontario)

"'Fill in the Blank' and 'Sometimes I Wonder' are a couple more of those prime Cleveland pop Records that come out every five years." - Chris Stigliano

"Although the NOHMA and Western Reserve Historical Society's efforts of collecting Cleveland's music history are in the early stages, they've already borne fruit. Denny Carleton, who played in many noted and cutting edge bands in the '60s and '70s and still is an active musician today, donated his files relating to his bands... Not that he's looking for just anything. It has to have significance to future researchers. ....

"The cassete underground has it's own established companies, among them are only Reachout International in New York and Green Light in Cleveland Ohio."

"I want to thank you for the tapes you sent and to tell you that I was quite impressed with them. The compilation you put together was excellent. The instrumentals were great and will be especially useful considering the bi-lingual format. Paul E Comeau (DJ in Nova Scotia, Canada)

"It's puzzling why the Lost Souls couldn't get a record deal. Perhaps the old 'right place at the right time' adage didn't catch up with them."

"Make a try and write to Dennis; satisfaction guaranteed...You should truly support this great musician from Cleveland and buy his tapes." 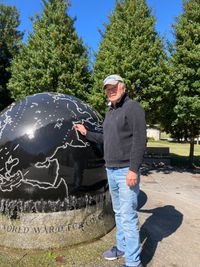 Denny Plays With John Franks and the Children's Choir