Here is an excerpt from The play OHIO

Narrator- “Ohio continued to grow and expand, and in 1798 Congress passed resolutions to give land to Revolutionary War veterans. So there was plenty of land available. One of the most interesting characters during that time was Johnny Appleseed, who used the land to plant seeds.

Johnny is a legendary American figure. He also was a minister of the Church of the New Jerusalem. So when Johnny planted apple seeds, he also planted seeds from the word of God.” (ALEX J.) (SONG)

Young Child- “Hey Johnny, what are you doing?” (TAYLOR S.)

Young Child-“Hey Johnny, tell us one of your stories about animals.” (KAILEE)

Johnny Appleseed-“Well, once I saw an old horse being put out to pasture. I bought that horse and then gave it to another farmer so he could have a decent retirement.” (JOHN)

Young child—“Tell us another story about animals, Johnny.” (TAYLOR)

Johnny Appleseed-“Well, one time I was out in the cold freezing so I built a fire. There were some mosquitoes that kept being drawn to the fire. So rather than hurt the mosquitoes, I put the fire out and froze all night.” (JOHN)

Young child-“Wow, kind of like St Francis! Do you plant any other seeds besides apple seeds?” (KAILEE)

Johnny-“Besides apple seeds, I plant natural herbs that were used for medicine. The poor folks can get free natural god- made herbal medicine. The herbs are still available around the Mansfield area.” (JOHN)

Older man-“Well children, the popular image of Johnny Appleseed had him spreading apple seeds randomly, everywhere he went. In fact, he planted nurseries and built fences around them to protect them from livestock. Despite his best efforts to give his wealth to the needy, Appleseed left an estate worth millions when he died. He could have left more if he had been diligent in his bookkeeping.” (BRANDON C.)

Child –“Johnny, why weren’t you more diligent in your bookkeeping?” (TAYLOR)

Child-“But Johnny, why the pan on your head?” (KAILEE) 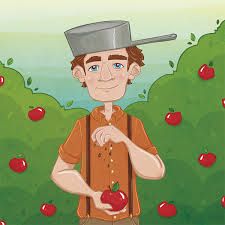 Narrator-“In 1876, Garfield purchased the property in Mentor that reporters later dubbed Lawnfield, and from which he would go on to conduct the first successful front porch campaign for the Presidency. Can you imagine?”

Reporters-“Mr. Garfield, why did you call us here?”

Garfield-“Well, the reason I called you here was to announce my presidency. I plan to never leave my front porch and just campaign from my home.”

Reporter-“Do you mean that you won’t campaign anywhere else?”

Garfield-“Yes, I will only campaign from my porch, and you will come here and report in your newspapers to the whole country.”

Reporters-“Do you believe you can be elected this way?”